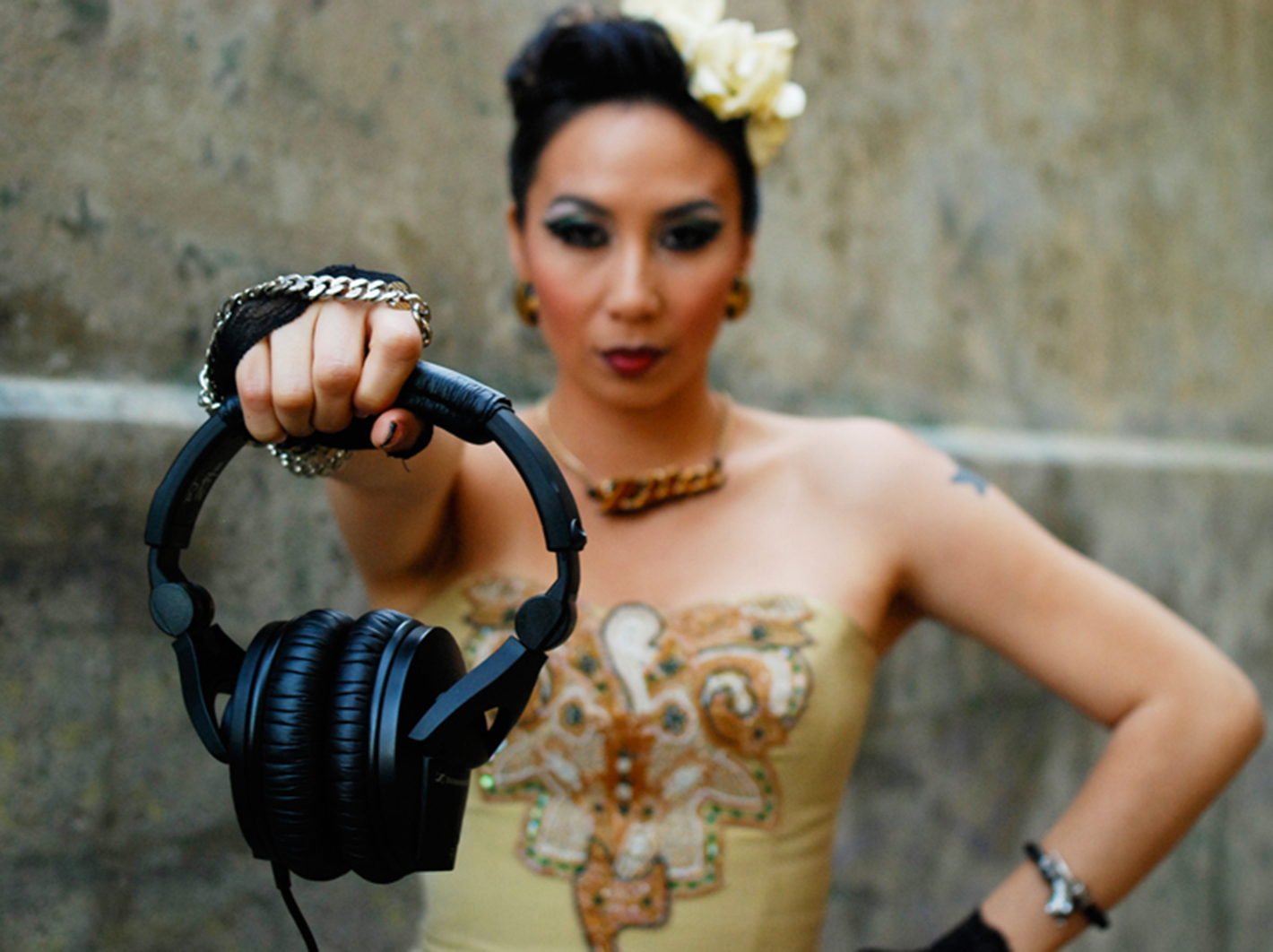 A staple in the Bay Area for over 15 years, lady DJ Zita has been steadily building a DJ queendom beat by beat. Known as a party rocker, classic record provider, tireless promoter and meticulous organizer, Zita has brought her sisterhood sounds to dancefloors on both coasts and overseas since 1999. Her captivating sound spans the eras and blends genres of body-rockin’ music; she’ll seamlessly segue from boombox classic hip hop to mothership trunk funk, spin smooth R&B treats along with timeless soul heroines and heroes, flip reggae dancehall riddims, throwback to ’80s pop and freestyle, and groove the dancefloor with her soulful deep house. At first one of only a handful of women on the scene, Zita established Bay Area Sistah Sound (BASS) and Queendom to unite women DJs and performers. She can be found holding down residencies in San Francisco and Oakland as part of DJ duo Golden Soundscapes with partner Dmadness, as well as producing fresh events spotlighting women in hip hop and guesting at many premier music nights and venues. Also find her behind the turntables at weddings, private engagements, and corporate events. She has provided the soundtrack for special events with Nike, LinkedIn, IBM, Oracle, Wix, and Bay to Breakers. In 2012, Zita was selected as the only woman DJ to compete at the world-renouned Red Bull Thre3Style battle in San Francisco, which is considered a global honor in the DJ industry. With her dazzling style, fierce determination, and golden touch on the wheels, DJ Zita has changed the landscape and continues to shine.

“Don’t let this pretty face fool ya, DJ Zita is a straight monster on the ones and twos droppin some of the most body rockin hiphop, soul, funk, reggae, smooth groove sets in the Bay.”
–Joseph Gross (ArtNowSF, Joseph Gross Gallery)

“It’s rare to find a DJ today who pours as much love and who takes as much pride in her mixes as Zita. I’ve been honored to play alongside someone so creative, hardworking, and musically wise. And don’t get it twisted––she isn’t just a talented female DJ. She’s a talented DJ. Period!”
-DJ Neta (Ital Selection Hi-Fi)

“DJ Zita adds Love, Passion, Dedication and the Aloha spirit to the DJ scene. She is as loyal to the music as she is to her friends. I look forward to seeing her keep shining in the Bay and everywhere else that she drops her unique, party-rockin’ Zita steeze.”
–Mr.E (Papalote)

“DJ Zita is one of the most recognizable female DJs I know. And how could she not be? With a fierce sense of style and an aloha smile, she’s got the radiance to make the sun shy. DJ Zita is responsible for setting up the coalition of talented female DJs throughout the Bay Area, bringing attention to the women who hold us down on the 1s and 2s. DJs hold a lot of power on the dance floor, and when they’re up there, we all surrender to the spell of their command. Luckily for many of us, DJ Zita inspires big, big love.”
–Ruby Veridiano

“DJ Zita is one of the hardest working DJs in the Bay Area! She is truly an inspiration as she not only works to build her empire, but also works to uplift and strengthen the solidarity of the female dj community.”
–DJ Shred One (Brooklyn Circus)

“Besides DJ Zita’s obvious talent behind the turntables, she also manages to showcase her enthusiasm for her work through her dedication, persistence and sense of professionalism.”
–DJ Vinroc (Triple Threat, That’s That Label)

“I ride for DJ Zita because she is the ultimate feel-good party DJ. If there’s a song you wanna hear, she’s probably already queuing it… On vinyl! I am convinced the song “Last Night a DJ Saved My Life” is about Z and her quick cures for a good music withdrawal.”
–Hopie Spitshard

“Sistas like DJ Zita do more than just rep femininity, they show young and old heads alike that hip hop is fly, intelligent, beautiful, and fierce. DJ Zita is a great example of this unapologetic talent and strength. I commend her as a DJ and promoter for challenging the crab mentality – instead of competing against other women tryin to make a name for themselves, she strives to bring those women together. She is an inspiration. Did I mention that she keeps me on the dancefloor long enough to get a leg cramp?”
–Miss Kristia (Dooknockers)

“The hardest working DJ in showbiz! Don’t let her beauty fool you. DJ Zita can keep up with any DJ (male or female) in the Bay Area. DJ Zita has never waited for success to come to her. She carved her own path and knocked down the gender door as a prominent promoter and DJ herself. One of the coolest things I ever saw a DJ do was by Zita. During the last song of her set, with the dancefloor packed, she walked out from behind the decks and danced with everyone. That showed me the love she has and the love people have for her.”
–Justin Marine (Mixerfriendly)

“During the day, she makes a living as an English teacher. By night, she trades in her textbooks for turntables and transforms into DJ Zita, one of the Bay Area’s most prolific DJs.”
-Jamilah King (WireTap Magazine)

“Zita not only moves crowds with her energetic blend of hip hop, reggae, & soul, but also plays a key role in producing quality events uniting DJs & talent on one bill throughout the Bay Area.  Her work has been significant in highlighting female DJ’s in particular by creating a welcoming platform for DJs from around the U.S. to share a stage.”
–DJ Lady Sha

“DJ Zita is one of the hardest working female DJs in the Bay Area. Not only is she a great DJ, she is raising the bar for women DJs and setting a great example of how to work in this business.”
–Chaney (Social Life Productions)

“DJ Zita is a true professional. She knows the right songs to play at the right time. She is a talented inspiration to young ladies who want to DJ.”
–Gabriella Davi-Khorasanee (Mama, M.I.S.S. Crew)

“DJ Zita is the hardest working woman on the scene! With talent, grace and style, she creates a world of music that includes all genres and people! Her monthly shows are a permanent fixture on my calendar. She’s a One Stop Non Stop Party Rocker!”
–Aima the Dreamer (Soulovely)

“I always keep my ears and eyes on DJ Zita. Besides being fresh on deck, she’s on point in branding and marketing her business. Young DJ’s should look to Zita as a solid example of what it takes to become one of the best in their game.”
–Paloma Belara (The PapaLoDown Agency)

“DJ Zita crafts the best mixes of old and new school hits and adds flavor from the underground.  Definitely one of the best in the Bay Area!”
–The Conscious Daughters (Guerilla Funk)

“DJ Zita is totally professional, friendly, and a refreshing addition to the Bay Area DJ family. I am honored to work with her and stand in admiration of her DJ skills!”
–Miss Candi Martinez, Publicity and Talent Director

“When I bring out-of-towners to see DJ Zita, they try to schedule their next Bay Area visit around one of her parties!”
-DJ Whitecastle

“The dancefloor at our wedding was packed from the time DJ Zita went on until the security told us that we had to go. Every guest had a memorable time dancing and singing along to the songs. Zita couldn’t have ended the night at our reception any better!”
-Maritza and Jess Benavente, San Jose, CA

“We knew with no hesitation that we wanted DJ Zita and Dmadness (Golden Soundscapes) to spin at our wedding. They gave us the perfect blend of old school hip-hop, r&b, and funk that kept our guests singin’ and groovin’ with every song. On top of that, they were able to cater to our “special” need for line dancing, cha-cha, and tango for the Filipino familia. Throughout the planning, they were great to work with, offering advice and guidance when needed. No doubt – the best DJs in the Bay!”
-Emmile and Jonathan Brack, Oakland, CA

“Zita and Dmadness (Golden Soundscapes) were incredible DJs at our wedding. The dancefloor was packed all night and just about every guest said it was the most fun they’d ever had at a wedding reception.”
-Arnold Chandler & Janet Co, Oakland, CA