DJ Zita was the only woman invited to compete at the Red Bull Thre3Style San Francisco on March 1, 2012, which is a considered a global honor in the DJ industry. Red Bull Thre3Style is a DJ contest that promises to be a night of dance-floor mayhem. The participants have to play a selection of at least three genres or styles of music in 15 minutes. It doesn’t matter what genres of music are chosen so long as the DJ can make them work together. Check out this live recording of Zita’s Red Bull Thre3Style set. 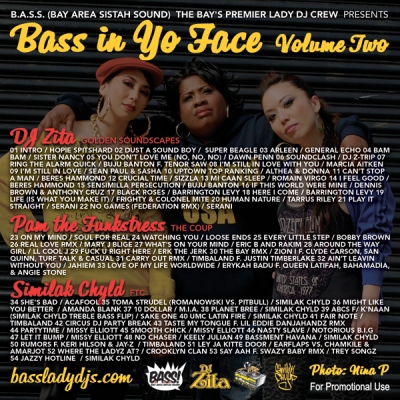 1989 was the summer: Radio Raheem’s 4-finger rings told the story of the left hand vs. the right, Hate vs. Love. It was the end of a decade of a tour de force in pop, soul and synthesizers. This new set by The Bay’s DJ Zita, appropriately collected for Made Jewelry‘s new line LoveHate, revisits the many sides of the 80s rubix cube. The intro stabs of “Funky Little Beat” evoke visions of poplockin under palm trees; Rufus & Chaka’s harmonizing sounds like they could’ve lasted forever; Robert Smith’s voice embraces the duality with equal parts rapture and melancholy. Who wins in the end? I bet Frisco mic vet Melina Jones knows: Left hand Hate K.O.ed by Love. 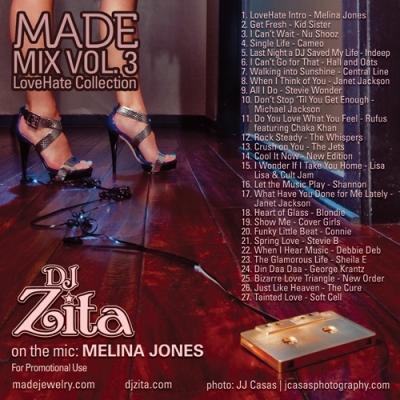 WHERE MY LADIES AT? A Tribute to the Queens of True School Hip Hop ~ DJ Zita

BASS IN YO FACE Vol.1 ~ DJ Zita & Pam the Funkstress

Yo Pam! Yo Z! Kick in the B.A.S.S! Feel the San Andreas quake as these two queens of Bay Area hip hop crank up the low end with this hard-hitting, fast-moving snapshot of their party-rocking sistah supremacy. From Bay classics to now bangers, hip hop sing-alongs to new jack throwbacks, peep DJ Zita push the subwoofers with her nimble mixes. Then get a cushion for your neck as you witness Pam the Funkstress lay her legendary cuts and slices all over the hardest boom bap on wax. The first offering from the year-old collective, this mix delivers on the sound that the ladies are known for on the dancefloor. Funk the neighbors – turn this one all the way up and shake the building – it’s an instant house party with the women on the decks!

What is a hero? Golden Soundscapes DJs Zita & Dmadness answer that with a heavy crate of not just classics…but a vinyl fossil record of hip hop’s most transcendent moments: witness as Pharoahe Monch narrates the flight of a stray bullet in first person; Mos Def places a stethescope to the sternum of the city; an up north inmate reads a letter from his main man Nasty Nas. With fierce Cali femcee AIMA escorting, Z&D mix, cut and blend to life the era when MCs dedicated entire songs to their DJs…when a hip hop artist could actually be somebody’s hero. But at the end of the day, as dead.prez assert, “It’s bigger than hip hop”..and as Andre reminds, “Heroes eventually die.” Slap Vol.2 in the boombox and bob your head as you make a list of your own heroes – hip hop or not.

The first in a series of collaborative Golden Mixes by partners DJ Zita & Dmadness, this is an epic 80-minute collection of Soul and R&B favorites spanning the past 30 years. Laid out in His & Hers sides, the Golden Soundscapes DJs mingle the siren sounds of Soul Sisters Sade, Jill, Mary J, Aaliyah and Les Nubians with the sparkling spirits of Soul Brothers Stevie, Prince, D’Angelo, Marvin and Luther. Both DJs produce live blends and crucial reworks of select tracks as well. The icing on this lovers’ cake is the vocal harmonies of Oakland chanteuse Femi, who blesses the opening and hosts the session with the style and grace of a true Soul Sister. Soul admirers and lovers world-wide, throw on this baby-making music and watch the temperature rise!

In this ArtNowSf-commissioned mix, DJ Zita funks you right on up with a collection of 70s and 80s legends sprinkled with some key hip hop cuts that pay homage to the groove and the rhythm of Funk. From the early sister speak of Sequence to the vocoder bass boogie of Roger & Zapp, Zita’s got the whole psychedelic spectrum covered as colorful as George Clinton’s braids and as fresh as the Godfather’s feet.

GET UP ON THIS Throwback Party Mix ~ DJ Zita

From the first drop of the needle, this set races through a supersonic 45-minute workout stacked with favorites from MJ, Prince and Stevie, house party anthems from DJ Kool and Rob Base, and even some booty-shake classics from Miami Bass pioneers Afro-Rican and MC Shy D. Just like her dancefloor-filling live sets, DJ Zita commands you to get up and Get Down! Throw on this throwback mixtape and see if anyone can stay in their seats. 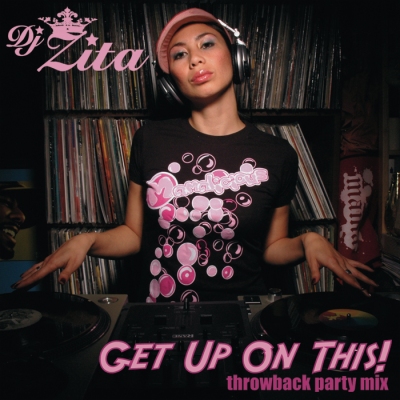 This mix marks DJ Zita’s breakout year into the Bay Area scene with West Coast rap smashes and ’80s freestyle divas, a Saturdays mastermix, and electro-jazz scratch futureshocker “Rockit.” From the cover shot to the playlist you know this dj woman means business. 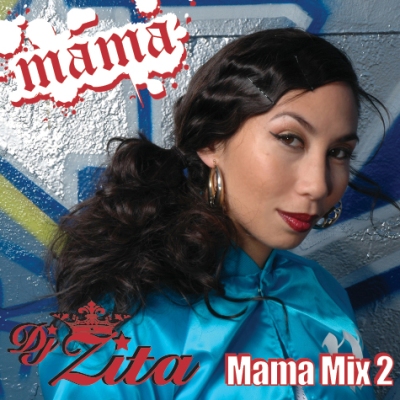