“Women Runnin It” features women in dynamic positions of cultural leadership in Oakland. Our first focus in this series brings a spotlight to Oakland female producers and promoters. Usually behind the scenes, these women are the ones bringing your favorite concerts, shows and nights for you to soak in and live the culture of Oakland.  How do they build community and social arts networks? How do they curate a meaningful event or a club party?

Important to many of us, particularly women and LGBTQi persons, is the ability to go out at night, share our art, enjoy dancing or conversation and not have to defend our bodies and presence. The promoters who are committed to holding this ground for us and advancing it are bringing female artists, gender fluid and non-ratchet parties, and holding down inclusive, ‘safe’ spaces through curating social arts. They are cultural stewards that we at Oakulture value and support. We think you should too. Check out previous women highlighted in the series, including Candi Martinez, Chaney Turner, Nina Menendez and Gina Madrid aka Raw-G. 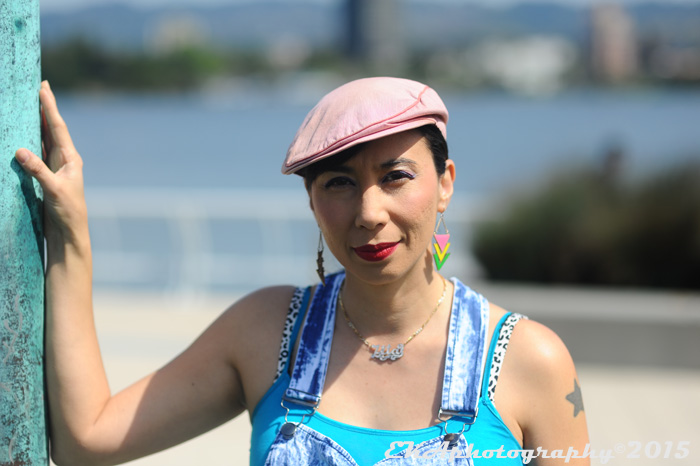 In this edition of “Women Runnin It,” we are proud to turn the spotlight on DJ Zita. To be truthful, this series could have been named after Zita and her years of spearheading and cultivating women-centric events, collaborations and culture in the Bay and beyond. For almost fifteen years now, Zita has been a moving force to be reckoned with as a DJ, promoter and organizer. She has performed with some of the best, including DJ Q-Bert, Shortkut, DJ Apollo, DJ Shortee, Mr. E, Medusa and J-Boogie. Illuminated in her popular mixtape series, DJ Zita spans musical genres from hip-hop to R&B and neo-soul to reggae dancehall with her selections and is known for her commitment to true vinyl skills and her rep as a party rocker.

A true leader knows how to share power. Zita has been a leader in understanding the importance of female solidarity. As she clearly articulates in her interview, her methods have been directly aimed at creating woman-centered culture. Her annual “Queendom” event, coming up on its sixth year, is an inspiring throwdown showcasing women in all four elements of hip-hop artistry (MC, DJ, dancer and graffiti artist). Over the years, “Queendom” has given opportunities to many emerging women hip-hop artists, DJs and dancers, which in turn helps grow the community. Most importantly, “Queendom” models a value of respect for all as non-negotiable. It illuminates what we miss out on when we allow our culture to neglect and degrade women’s voices and skills.

Zita currently holds court in the BASS crew (Bay Area Sister Sound) along with Pam the Funkstress, a Bay Area legend and hip hop pioneer who has been known to scratch not only with her hands but with that most powerful female appendage – the breast. Zita also maintains residencies in both San Francisco and Oakland, and regularly teams with her partner DMadness in the DJ duo Golden Soundscapes. She can accurately be credited with transforming the landscape of Bay Area club culture, helping to further woman-positive hip-hop, and uniting female DJs, performers, promoters and audience.

Oakulture: What values do you bring to promotion and/or production and how do they impact your decision-making?

DJ Zita: Initially inspired by my passion for music as a DJ, my purpose has always been to provide a platform for women artists to shine in a male-dominated music industry. As a founding member of the “Sisters in Sound” women DJ collective in Hawaii (2001-2003), as promoter of my “Do My Ladies Run This M*tha F@#ka?!” event series in 2007, as the founder of “Bay Areas Sistah Sound” (BASS) lady DJ crew in 2008, and since then, individually as promoter DJ Zita, I have been able to create spaces where women’s talents are spotlighted and celebrated.

At the core of my efforts is a call for sisterhood. It’s important to me to unite women DJs and performers. When I entered the Bay Area scene back in 2003, I noticed that there were so few of us women DJs, but we were all doing our own thing. The female hip-hop DJs then were: Stef, Pam the Funkstress, Neta, Celskiii, Deeandroid, Olga T, and me. This was my inspiration for curating and producing my series of “Queendom: Fly Women Reppin’ the 4 Elements of Hip Hop” events and in 2008, establishing the BASS crew. I chose veteran DJs Pam the Funkstress and Neta to join me on my mission to create the only female-DJed and female-promoted event in the Bay at the time. By reaching out to women and collaborating with them on my projects, I built my extensive network of women DJs, MCs, dancers, singers, and artists, and I created a sense of solidarity among us that was previously nonexistent. I am often introducing artists to one another at my events because they haven’t met before. At the BASS 2-Year Anniversary event at 111 Minna SF in 2010, I was able to book 18 Bay Area women DJs to spin together under one roof. My approach stems from my values of collaboration and community – over competition and isolation.

In my booking considerations, talent reigns even over the artists’ image, age, affiliations, or following. There’s no substitute for the necessary hard work, creativity, and talent required to represent women in a powerful way and to stand shoulder-to-shoulder with our best male counterparts. I want to let it be known that a fly sister in the club ain’t just eye candy. Additionally, I have a focus on booking women of color because it’s important that this group in particular has real opportunities to shine.

Oakulture: What’s exciting to you about Oakland culture right now?

DJ Zita: Since I used to be only one of a handful, it’s an exciting time in Oakland with the emerging women artists and promoters, such as dope hip-hop heroine MCs MadLines, Ryan Nicole, and Coco Peila. As I observe more women entering the scene, I only hope for further collaboration and community building among them to ensue because that is a critical piece of our progression.

On a personal level, I hold dearly the value that family comes first. Now that I have two young children, I am prioritizing my energies towards raising them and advancing in my career as a college teacher. To keep it real, it’s impossible to support a family off of DJing and promoting events, especially with the lack of health benefits. I’ve chosen to cut back on promoting to have more time dedicated to my family. To fulfill my love for DJing, you can still find me behind the turntables at my local monthly DJ residencies, which are currently: “ESCAPE,” Fourth Fridays at The Layover in Oakland (since 2010); “ELEVATE,” First Fridays at John Colins SF; and “GOLDEN,” Third Saturdays (since 2006) at Laszlo SF alongside my Golden Soundscapes crew partner/husband, DJ Dmadness. I support and proudly pass the torch onto the next generation of women promoters leading the pack, including my sisters: Oakland’s own Chaney Turner of Social Life Productions and Candi Martinez of SKIN and Spread Love Media.

Oakulture: What approach or strategies do you use for creating and maintaining an inclusive space?

DJ Zita: The inclusivity of my events is rooted in my already diverse following that includes youth, the LGBTQi community, and people of color. I employ strategies to embrace all communities through the diverse representation of talent that I book and the avenues I promote the event. My Queendom events at La Pena and Betti Ono have been all-ages, extending my audience to showcase youth performers and to allow the younger generation to witness them.

I have hip-hop in my heart but love for all genres of music. With my Queendom events, I wanted to take it back to hip-hop’s roots by featuring all four elements. I was able to curate a series of these events that featured women beyond the DJ realm, by also inviting MCs, B-girls, and graffiti artists to bless the stage. I’ve used my Queendom events to bring attention to women’s issues and to support the local women’s community by donating a portion of the ticket sales to: a domestic violence shelter, an organization working to end sexual violence, and several organizations that empower young women.

Oakulture: What do you wish people knew or understood more about the behind-the-scenes?

DJ Zita: Event production and promotion is hard work! It’s not only very competitive, but it also requires a broad skill-set to be successful: vision, business marketing, networking, negotiation with venues, stage management, flexibility, strong communication, people skills, patience, and creativity. While it requires so much love and commitment, the return is not equivalent. When I successfully held down the BASS monthly residency with a packed club and line down the block  featuring local women DJs, Conscious Daughters, and the amazing DJ Shortee, the club owners ended my night because they “wanted to make more money.”

Oakulture: If you could book anyone, who would it be?

DJ Zita: I dream of booking these queens: Missy Elliott, Erykah Badu, and Sade.
A dream come true for me would be to assemble a crew of the Bay’s fly, fierce, bad-ass women DJs, MCs, dancers, and artists, and we get booked for a world tour.

ESCAPE 4th Fridays (since 2010)
at The Layover, Oakland

GOLDEN 3rd Saturdays (since 2006)
with DJ Dmadness
at Laszlo, SF